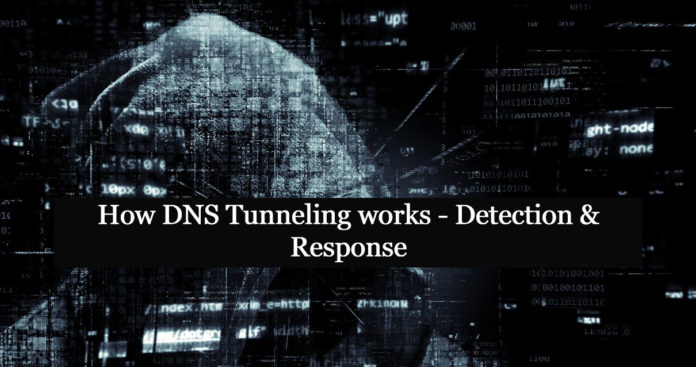 DNS acts as a phone directory for the internet, allowing IP addresses and domain names to be translated. Long strings of numbers are difficult for humans to remember. A web address (such as extrahop.com/network-attack-library) is easy to remember and provides some information about your destination. Since web browsers employ IP addresses, you’ll need an option to transform the two.

How does DNS Tunneling work?

An attacker first registers a domain name, such as “dns.com”. Then points its nameserver records towards the server where the DNS tunneling server program is running. The server acts as an authoritative name server for that domain name and its sub-domain to facilitate server-side tunneling and decapsulating the payload data by running DNS tunnel server daemon on the server

Attackers will use different types of DNS Tunneling record types in which to embed their attack. The most popular DNS tunneling records are TXT, NULL, and CNAME. TXT records are often used because they have the largest and most diverse payload structure.

Data is transferred back and forth via DNS Tunnel in this manner. To avoid caching, DNS answers have a short TTL value. The DNS protocol does not allow the server to create a connection with the client; instead, the client must make a query to the attacker’s DNS server on a regular basis to obtain new commands (C&C Server).

How to identify DNS tunneling attacks?

The detection techniques will be discussed in two separate categories, payload analysis, and traffic analysis.

Some of the payload analysis techniques are:

1.2-Entropy of hostnames: DNS tunnels can be detected based on the entropy of requested hostnames. Legitimate DNS names often have dictionary words or something that looks meaningful. Encoded names have a higher entropy and more even use of the characters set. Although, there are exceptions to this where DNS names are used to represent some type of information. Looking for DNS names that have high entropy can be an indicator of tunneling.

1.3-Statistical Analysis:  Looking at the specific character makeup of DNS names is another method that can be used to detect tunneling. Legitimate DNS names tend to have few numbers whereas encoded names can have a lot of numbers. Looking at the percentage of numerical characters in domain names has been proposed.

1.4-Uncommon Record Types: Looking for records that are not commonly used by a typical client e.g. ‗TXT‘ records is another possible detection method.

1.6-Specific Signatures:  In some cases, researchers have provided signatures for specific DNS tunneling utilities. A signature can be used to check specific attributes in a DNS header and check for specific content in the payload. For example, a Snort signature was developed for detecting NSTX DNS tunneling.

Traffic Analysis involves looking at multiple requests/response pairs over time. The amount and frequency of requests can be used for an indication of tunneling. Some of the traffic analysis detection techniques are:

DNS is critical for all businesses. Unfortunately, preventing DNS-based threats is a big task, and hackers are taking advantage of its inescapable but not totally evident exploitable surface. The above-mentioned techniques will be useful to detect and prevent DNS tunneling.