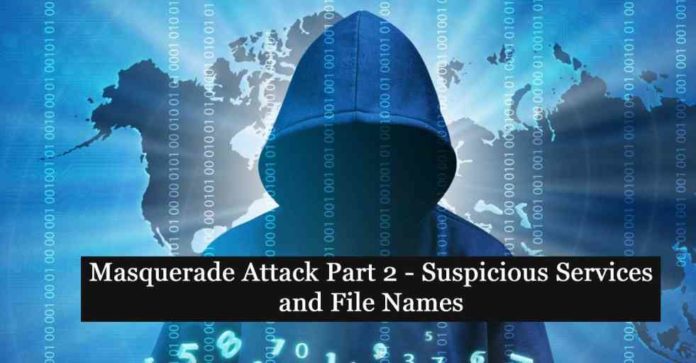 Malicious actors may try to change the name of a task or service in order to make it appear legitimate or benign. Tasks/services run by Task Scheduler or systemd are usually given a name and/or description. Windows services will have both a service name and a display name. There are innumerable benign tasks and services that have commonly associated names that are similar or identical to legitimate ones. Other fields, such as description, may be used by adversaries to make tasks or services appear legitimate.

Sometimes tricking the user that a normal task is being run to trick them that it’s a legitimate service.

Attackers may match or approximate the name or location of legitimate files when naming/placing their files. This is done to avoid detection and evades defenses. This can be accomplished by placing an executable in a commonly trusted directory (for example, under System32) or by naming it after a legitimate, trusted program (ex: svchost.exe). Alternatively, the filename provided could be a close match to a legitimate program or something innocuous. Malicious actors may also use the same icon as the file they are attempting to imitate.

In the below image we have imitated the rundll32 file. To the untrained eye, their names appear to be quite similar, but the difference is that rundll32 is now typed with an uppercase “i.” This may appear similar by typing rundll and rundII, but it also depends on the type of font used.

Malicious actors can mask a program’s true file type by changing a file’s extension. When it comes to certain file types (specifically this does not work with .app extensions), appending a space to the end of a filename changes how the operating system processes the file. We have more open websites to change the icon image and also text file icons to trick users.

In the below screenshot the extension is .txt and the icon is .exe icon. While checking the properties of the file, it clearly shows that it is an .exe file.

Screenshot 1: This is what users visually see while downloading it from email or browser.

Malicious actors may use double extensions to conceal dangerous payload file types. A common application involves duping a user into opening what appears to be a harmless file type but is actually executable code. These files are frequently disguised as email attachments, allowing an adversary to gain Initial Access to a user’s system via Spearphishing Attachment, followed by User Execution.

An executable file attachment named sample.txt.exe may appear to a user as sample.txt. The user may then mistake it for a harmless text file and open it, unknowingly executing the hidden malware.

So we have gone through all the techniques and detection methods for Masquerading attacks. Each and every move inside the machine will be a malicious activity sometime. So we need to monitor most of the rules mentioned above. Happy hunting!!