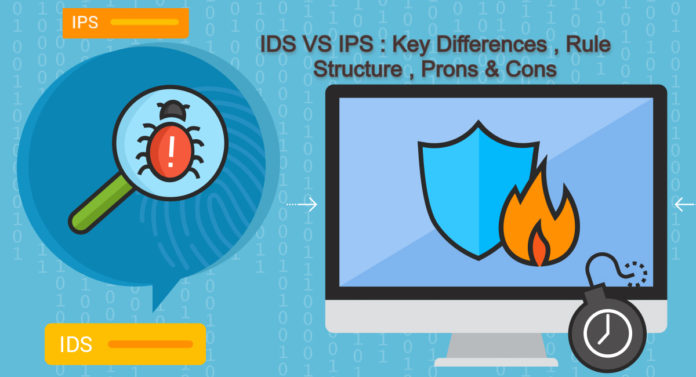 In 2021, the people accessing the network are in billion. Customers, vendors, and even remote users will be accessing our network. The lonely hacker who is bored with his daily routine has nothing better to do but try to break into our network. So to find the difference between legitimate and fraudulent connections, there is a need for one best system which should have the capability to handle billions of logs at a time. This is where an Intrusion Detection System and Intrusion Protection System can lend a hand. IDS and IPS pair up to provide network security. When IDS and IPS are combined, we can detect and stop hackers before they gain access to sensitive data on our network. IPS can keep in the inline mode which will act as both IDS & IPS which is called as Intrusion Detection & Prevention System (IDPR). IDS/IPS are both vital in protecting our network. They work together to monitor traffic and report attacks. A good security strategy is to have them work together simultaneously.

An Intrusion Detection System (IDS) detects and reports on attack attempts in their early stages. Any action that appears to be hazardous is frequently reported to an administrator.

A signature-based IDS or IPS sensor looks for specific, predefined patterns (signatures) in network traffic. It compares the network traffic to a database of known attacks, and triggers an alarm or prevents communication if a match is found. The signature can be based on a single packet or a sequence of packets. Pattern matching’s major flaw is that it misses new attacks for which the software doesn’t have a specified signature in its database. The effectiveness is reliant on the signature database, which must be kept up to date.

Anomaly-based or profile-based signatures typically look for network traffic that deviates from what is seen “normally.” It watches for deviations from normal usage patterns. This requires first establishing a baseline profile to determine what the norm is, then monitoring for actions that are outside of those normal parameters. However, the challenge with these systems is eliminating the possibility of improperly classifying abnormal behavior as normal.

There are several different anomaly detection methods, including:

The IDS or IPS sensor in policy-based systems is preset based on the network security policy. In a policy-based IDS or IPS, you must create the policies. If traffic is identified outside of the policy, an alarm will be triggered or the traffic will be dropped Policy-based signatures use an algorithm to determine whether an alarm should be fired.

The Different Types of IPS and IDS:

There are two types of Intrusion Detection Systems:

Network Intrusion Detection Systems (NIDS): The system is part of the network infrastructure and monitors packets as they flow through the network. NIDS usually co-resides with devices that have span, tap, or mirroring capability, such as switches.

Host-Based Intrusion Detection Systems (HIDS): This software resides on the client, computer, or server devices, and monitors events and files on the device.

There are multiple types of Intrusion Protection Systems:

Network-based Intrusion Prevention System (NIPS): This system is deployed inline in the network infrastructure and examines all traffic in the entire network.

Wireless Intrusion Prevention System (WIPS): This system is part of the wireless network infrastructure and examines all wireless traffic.

Host-based Intrusion Prevention System (HIPS): This software resides on the client, computer, or server devices, and monitors events and files on the device.

Behavior IPS: This system is part of the network infrastructure and examines all traffic for unusual patterns and behavior in the entire network.

A sensor can be deployed either in Passive mode or inline mode. In Passive mode, the sensor receives a copy of the data for analysis, while the original traffic still makes its way to its ultimate destination. By contrast, a sensor working inline analyzes the traffic live and therefore can actively block the packets before they reach their destination. Some IPS devices can work either in passive mode or inline mode. For example, Cisco ASA AIP SSM. IPS can be kept in the inline mode which will act as both IDS & IPS which is called as Intrusion Detection & Prevention System (IDPR).

2. The Benefits and Drawbacks of Using Inline Mode to Deploy an IPS:

The action specifies how the IPS responds to a threat event. Every threat or virus signature that is defined by IPS includes a default action.

When an IPS sensor detects malicious activity, it can choose from any or all the following actions:

When an IPS sensor detects malicious activity, it can choose from any or all the following actions:

Where does the IDPS fit into our security strategy?

IDS monitors all network packets right from OSI Layer 2 (Data) to Layer 7 (Application), and stores this vast amount of information in its database.

An IPS monitors traffic at Layer 3 (Network) and Layer 4 (Transport) to ensure that their headers, states, and so on are those specified in the protocol suite.

Why does SOC need IDS/IPS?

SOC analyst work is to analyze the alerts which we used to get from IDS/IPS to keep the environment safe. To know attacks and to dig them more, the IDS and IPS logs are more important. Since it catches the alerts based on the signature, it is very important to implement an Intrusion system in the organization.

There are many IDS solutions on the market today, as well as free/open-source IDS tools that you can download. The best solution for our organization depends on our network’s size, security needs, existing security infrastructure, budget and IT department structure, and workload.

One of the most popular freeware or open-source IDS products is SNORT:

Rules are created by known intrusion signatures. These are usually present in snort.conf configuration file.

Description: This rule will alert a DNS query to a NOIP Dynamic DNS domain, sometimes used by malware and other unwanted services.

Here the alert will be triggered if any UDP query is initiated from a home network and from any port towards any IP and if the destination port is 53.

You can level the playing field against threat actors and their attack tactics by using a layered security solution that combines signature and behavior-based technologies with other tools. Keep in mind that internet security risks are getting more stealthy and severe. The Intrusion Detection & Prevention System’s integrated capabilities, whether network or host-based, is one tool worthy of consideration.